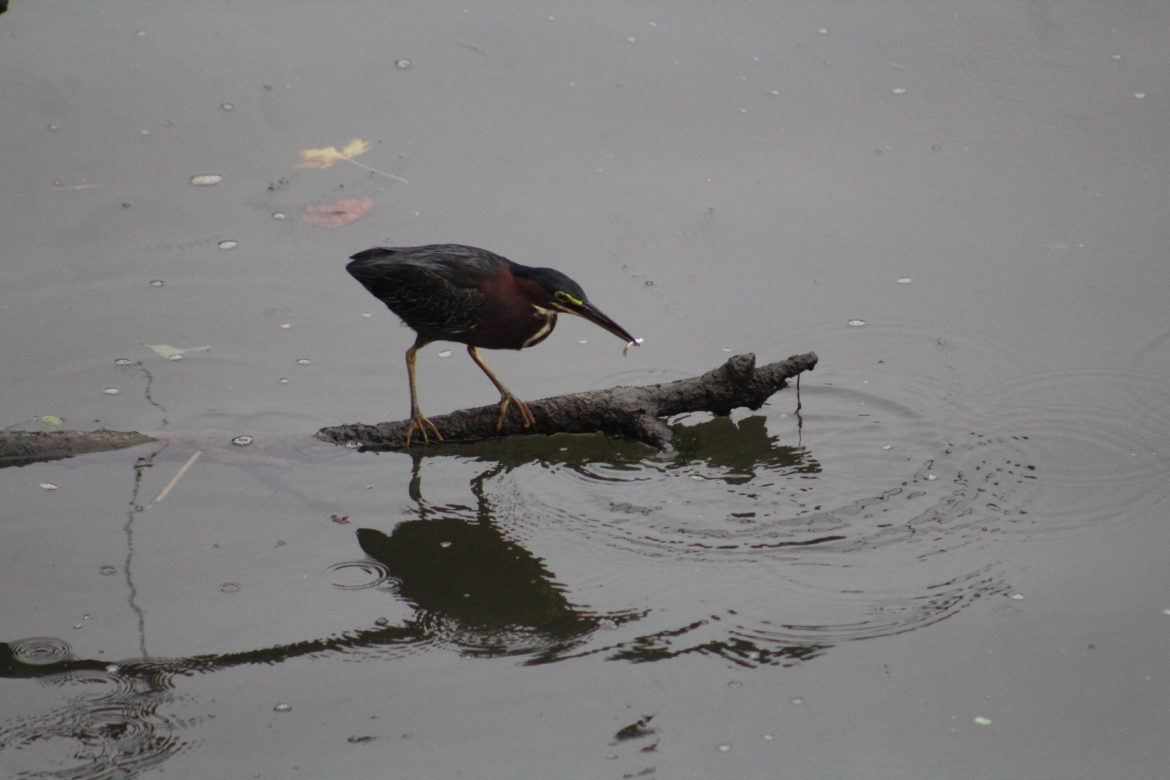 Hello everyone, welcome back! This weeks article is about a park very close to my heart, Frank Melville Memorial Park and Setauket Mil pond. The park is nestled quietly in a residential area of East Setauket right beside a small post office. There is a parking lot that can hold about 5 cars but plenty of street parking available (just be sure to read the signs to avoid any tickets). The pond is split in half by a stone bridge, half belongs to the park and is banned to fishermen while the other half narrows between the road and some residential homes and is revered by fishermen the island over.

On this most recent trip I decided to try an evening visit, so after work, I headed over arriving close to 3:30 pm. The weather had been rather ominous all day, raining on and off with dark storm clouds looming in the sky; but my weather app promised that I had a few hours before the rain would return and the storm was holding off. After walking only a few feet into the park I realised one very important fact, never trust a weather app. The skies opened up and I raced under a nearby tree to shelter myself, and my camera, from the pouring rain. Lucky for me the tree I found was right beside the pond and across from a section of fenced-off brambles and trees. Being stuck in one spot wound up being a great thing,  allowing me to watch on as birds sought shelter from the storm.

Looking up to the dark clouds above me I watched as a scattering of Double-crested Cormorants crossed across the sky and Northern Mockingbirds hid within the thick shelter of leaves in the treetop. Gray Catbirds, seemingly unphased by the rain, flitted about the brush, crossing from one side of the trail to the other. Two glowing Northern Cardinals showed from across the path within the cover of trees and a Blue Jay called its familiar call from the horizon. Beside me, along with the edge of the pond, an elegant family of Mute Swans foraged along the shore, bothered neither by my presence nor the weather. Song Sparrows pecked about the grass along the path and as the rain finally began to pitter to a stop, a pair of American Goldfinches flew around the fenced area of trees across from me.

After about an hour of waiting under the large tree, the rain finally began to slow to a stop and I set back out to continue exploring. Following the trail further along the loop of the park I came to see the second stone bridge, where I have had most of my luck birding in the past. On one side of the bridge sits the pond that I had been circling all along, on the other side an old gristmill marks the beginning of a low salt marsh leading out to Conscience Bay. The stark white of a Great Egret first caught my eye, bringing my attention down to the high grasses of the marsh which held my next sighting and a Lifebird for me! A Green Heron perched contentedly on a small, half-submerged log, searching for baitfish in the shallow water. After admiring the new bird for quite a while, and snapping tons of photos, I headed to the opposite side of the bridge to see what else the view had to offer. In the pond below the bridge thick blooms of milfoil and weeds created a thick blanket of cover for a vast array of turtles which happily hunted for dinner amidst a school of sunfish. Snapping turtles and Red-eared Sliders appeared from beneath the weedy cover and frogs croaked from their hidings beneath the shadow of the bridge. Unable to contain my excitement over a new lifebird I returned quickly for a few more photos of the Green Heron, now noticing a second one rooting around the shore behind the first. Watching on intently I was able to witness the bird inch closer to the water and snap several fish in its pointed bill. Overhead, an Osprey circled above the bay, a Great-blue Heron perched at the far side of the grasses and Red-winged Blackbirds clung to cattails within the marsh. High in the gloomy sky Barn Swallows raced and danced their acrobatic performance as they always seem to do and off in the distance, within the bay, a large rock sticking out of the water housed upwards of a dozen Mallard ducks.

Following the loop of the trail back around to the beginning once more I decided to cross the street to explore the opposite side of Mill pond which flows between Lake St. and Main St. The loud, familiar call of Blue Jays ushered me along the grassy shores, finding small cutouts within the brambles to spy the calm water. Having decided to walk along Lake St. accessibility was slightly less than is available on Main St (where fishermen usually set up) but for the purposes of birding, seclusion and brambles are usually better than clear shores. Bunnies emerged from their shelters to hop along the wet grass while the threat of an oncoming storm loomed in the air. Peering into the shallow water enormous Carp swam lazily about just beneath the surface. Northern Mockingbirds, House Sparrows, and Song Sparrows continued to race from one tree to the next and Canada Geese descended from the sky to wade atop the pond. A large group of ducks then caught my eye and my interest, pulling me in for a closer look. After a long while of examining and quietly inching closer and closer, I discovered they were all, in fact, Wood Ducks. The largest group of them I had ever seen in one spot.

As the Rain began to drizzle down once again I made my way back to my car, searching the trees and bushes for more feathered friends as I walked. Squirrels raced about the parking lot gathering Black Walnuts from around the cars. Frank Melville Memorial Park is absolutely breathtaking, a beautiful little corner hidden within Long Island. If you are ever in the area I highly recommend giving this park a visit, in fact, I think I would go so far as to recommend visiting even if you are not in the area. This park really is unlike any other and there is never a lack of wildlife and things to see and do. I have been visiting this park for years and fully intend to continue visiting for many more years to come. Until next time my friends, Happy Birding!