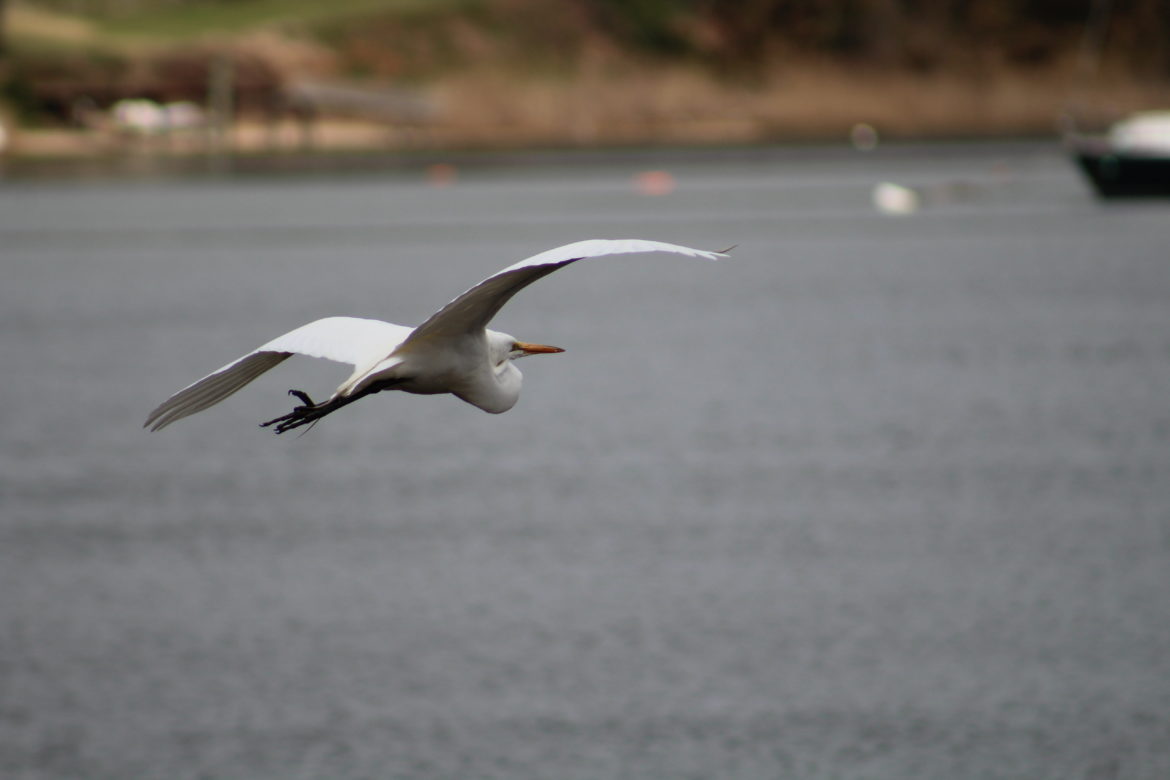 Hello again everyone! This weeks birding adventure was super exciting and brought us out to Centerport NY. Phragmites park was our intended destination but I must say, this being my first time to Centerport, I was enamored with the entire town! Every turn we made revealed another beautiful view or quaint little shop or attraction. The park itself proved evasive from us our first go around, driving right past it and needing to double back. Though there was a small sign labeling the park entrance/parking lot it was not easily spotted from the road and was actually labeled as “Twin Ponds park” which is not what I was looking for according to my research.

Missing the parking lot turned out to be an amazing stroke of luck because up ahead a huge nest in the top of a skyscraping pine tree caught my eye. We eagerly followed the winding roads towards the nest, making out the shape of raptors as we grew closer. Eventually, our exploring led us to the parking lot of a hotel (because the hotel is private property and the owners do not appreciate or allow, people trespassing to see the birds I will not list the name of the hotel here. If you decide to venture out to find the nest on your own please be courteous and considerate of private property, keeping in mind the reputation of birders as a group. There is plenty of opportunity for a good view from the sidewalk, where I and others photographed from.) Staring up to the top of the tree, sitting within the massive nest, perched the unmistakable American Bald Eagle! Though I never got the opportunity to view a fledgling peering over, their cries were clearly heard. 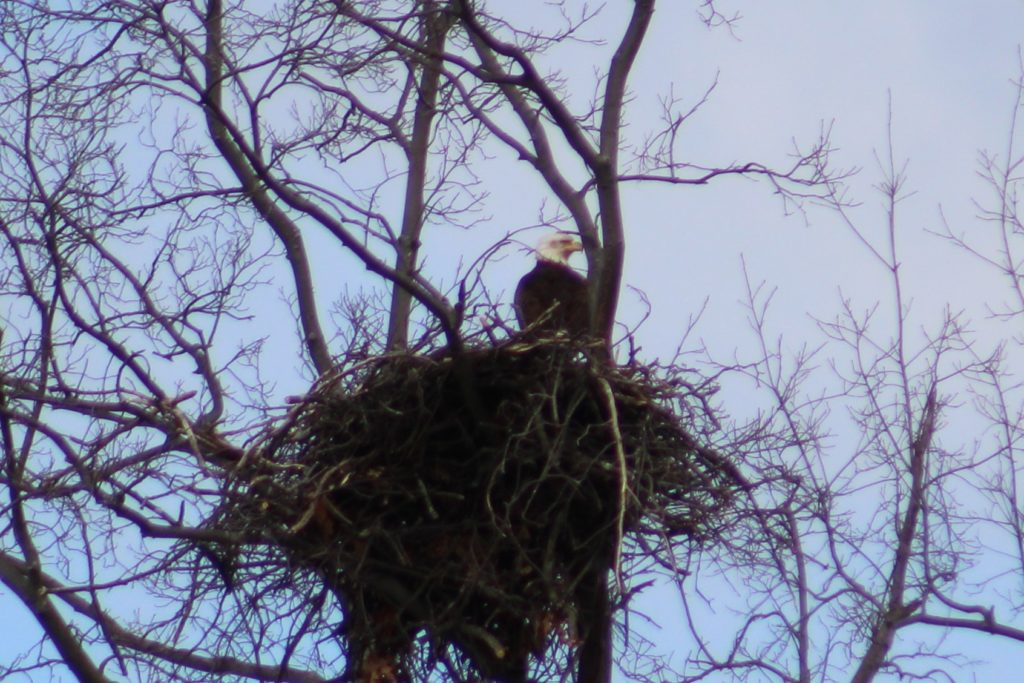 After our exciting little detour we circled back and found our way into the parking area, which was well kept and relatively spacious, however, did not have much in terms of information, maps or signage. There were two main trails that we could choose between, one of which was flooded due to the surplus of rain we had been seeing earlier in the week. Following the trail to the right side of the parking lot we headed into the park, the trail was easily visible yet slightly neglected (however it is still early in the season). A shallow stream ran alongside us to the right bordered on either side by a thick wall of reeds and bramble. Calls of birds echoed from every direction and small pops of green were starting to peek out from beneath the brown vail of winters dead leaves.  The first sighting, and most abundant of the day, by far, was absolutely the Red-Winged Blackbird; calling back and forth between the dozens of others occupying the trees. Within the stream, two Gadwalls floated along and soon we noticed the hoards of Common Grackles perching on outstretched branches, watching us intently as we went along. From within the dense reeds, we could hear the symphony of songbirds flitting about, however, despite our persistence, none came out to show themselves other than a lone, brave, Black-capped Chickadee.  On we walked and soon the path bent left leaving us with a thickly wooded area on our left and the stream/reeds to our right, behind which we could clearly see into a row of backyards and barking dogs. Not being frightened off by the ruckus, a Hairy Woodpecker continued hammering away at a snapped tree trunk, searching for a quick meal. 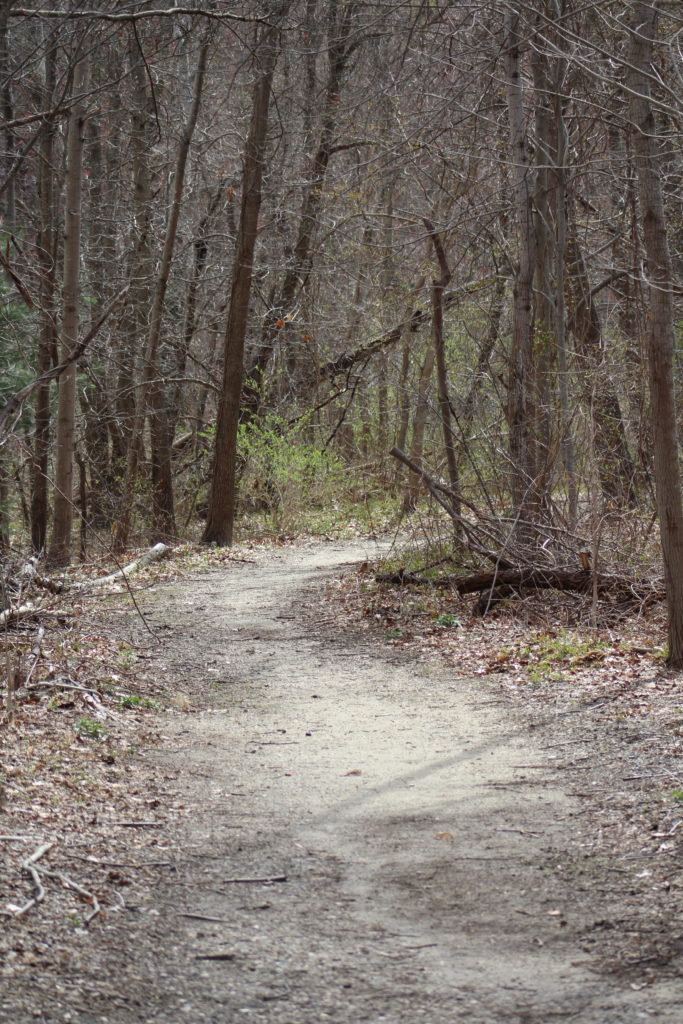 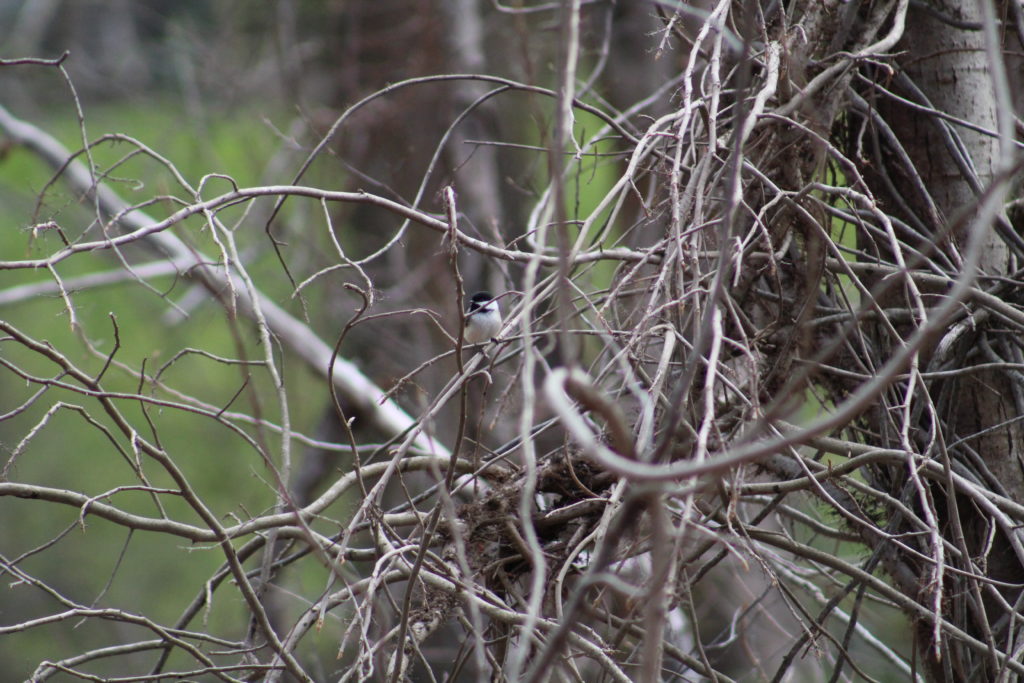 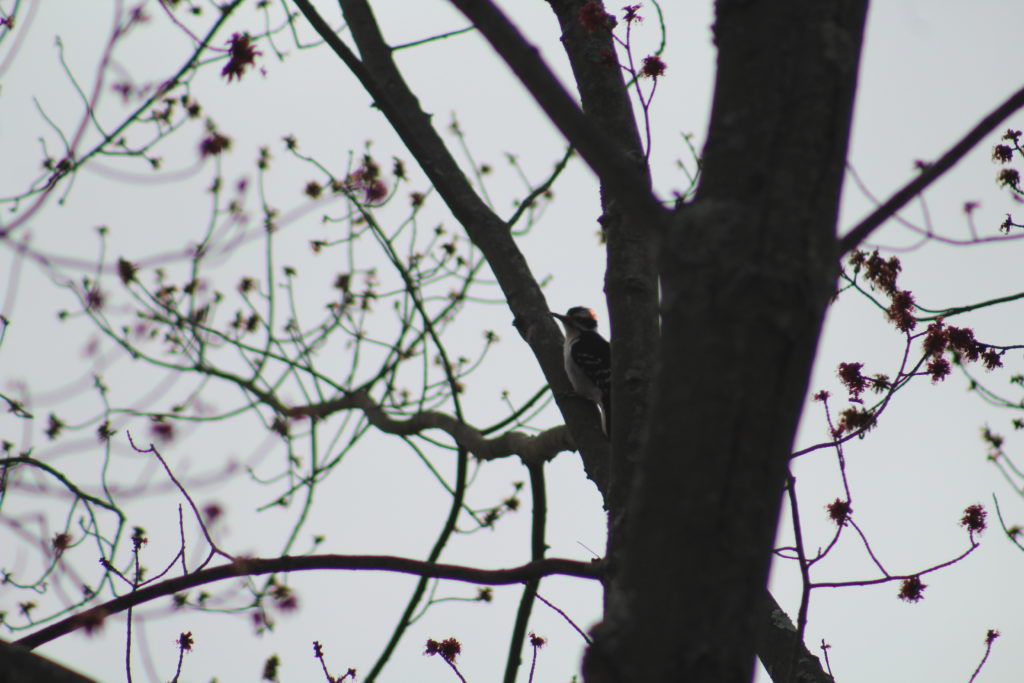 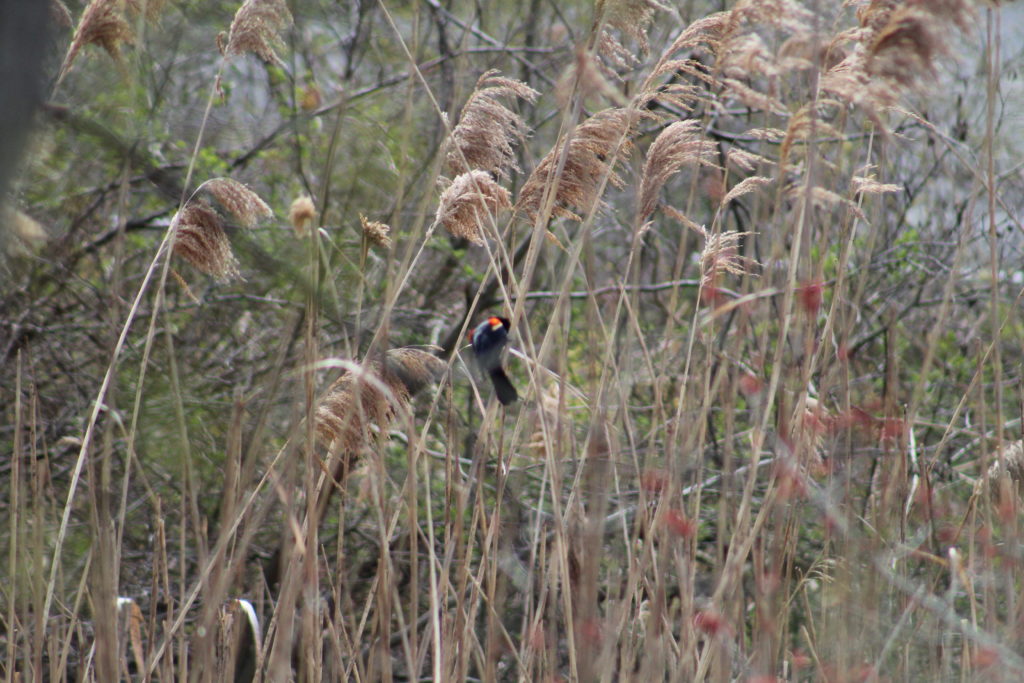 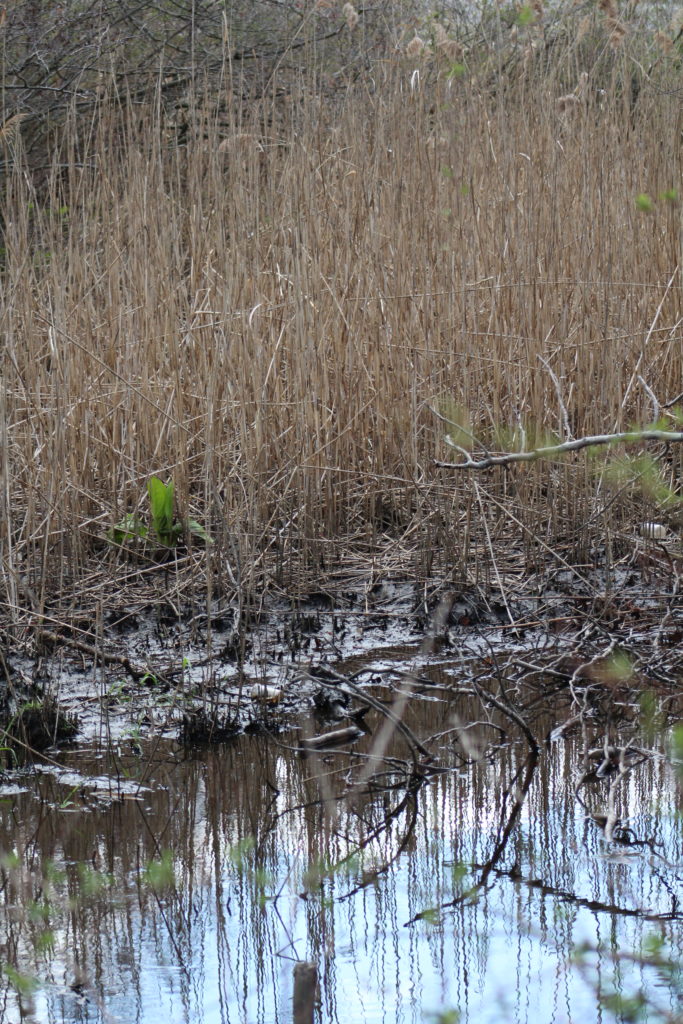 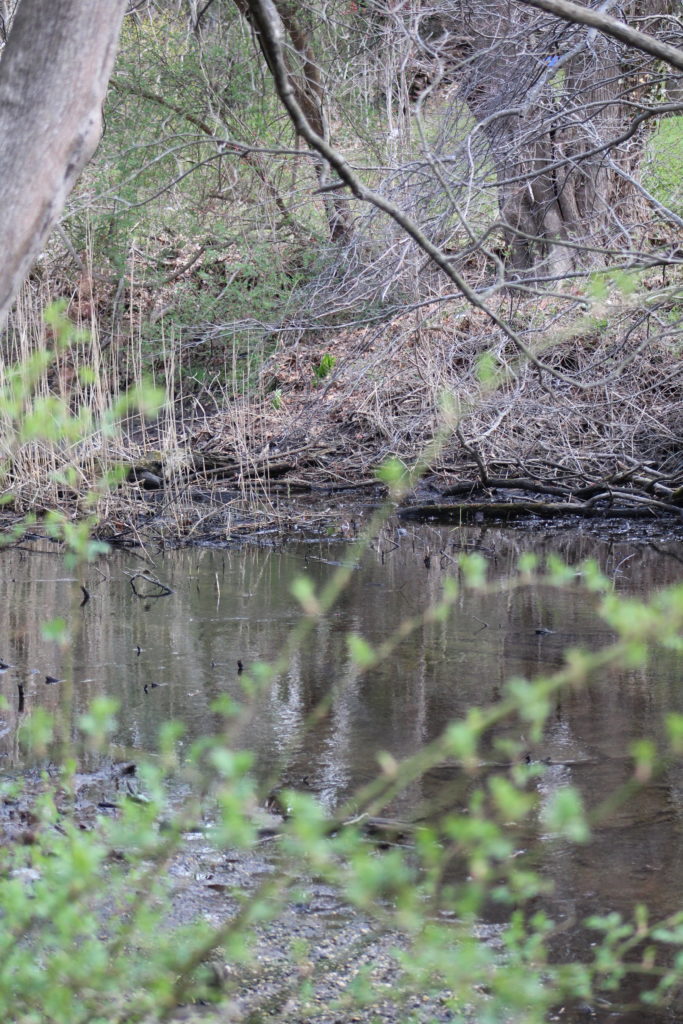 Within the tangles of vines and thorny branches, we could hear the rustling of leaves on the floor and nearly thought it the work of a squirrel when we came upon a White-Throated sparrow hopping about within the thicket. Common Grackles still decorated the branches overhead but then a flash of color caught my eye. I followed in the direction of the flying bird to find the most beautiful Northern Flicker, perched and calling out to its mate. As the magnificent bird flew off to the treetops I followed it with my lense hoping for one or two more shots only to spot a pair of Blue Jays watching us from above. Across the stream in one of the yards, a lone Canada Goose waddled about. The woods drummed with the distinct sounds of woodpeckers and we began scanning tree trunks and logs for the culprits. It didn’t take long to spot both a small Downy Woodpecker as well as a rather large Red-Bellied Woodpecker (while searching we also came upon an American Robin as well). 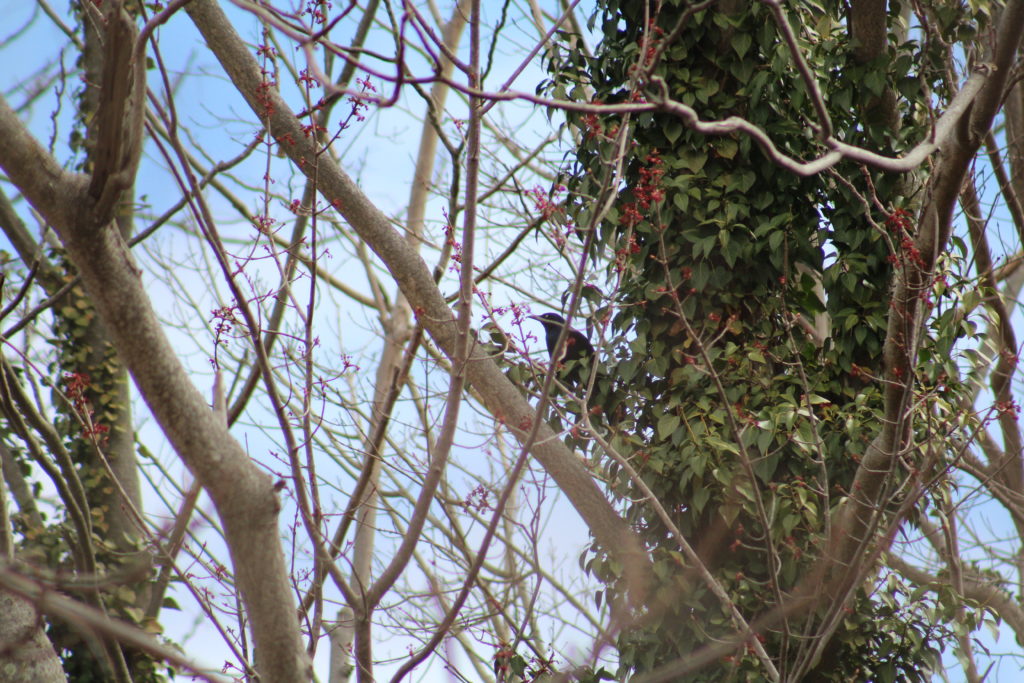 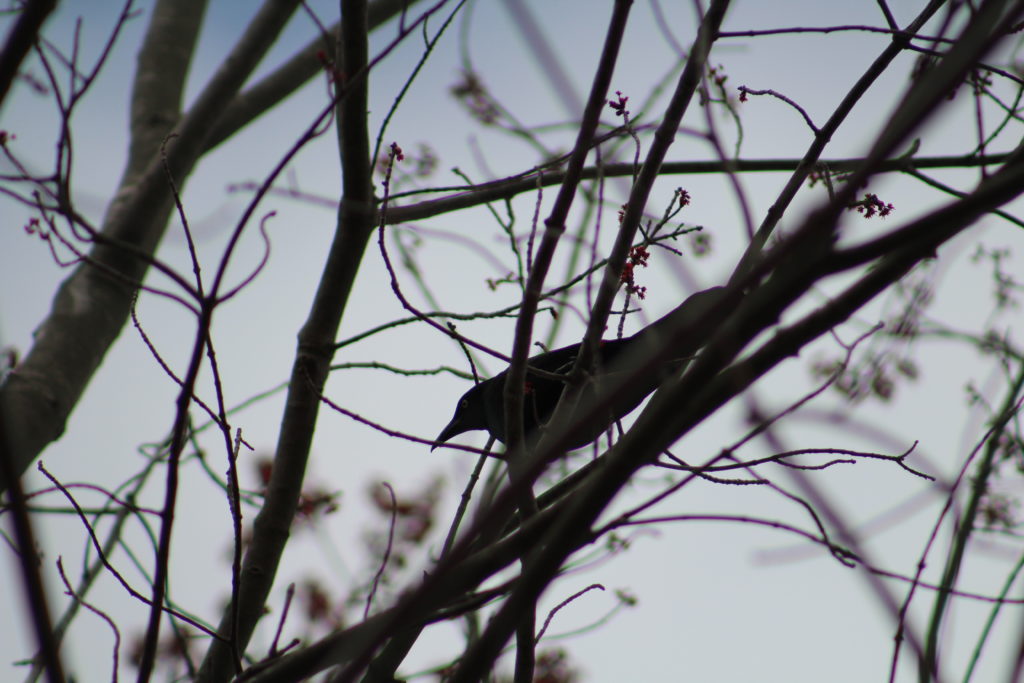 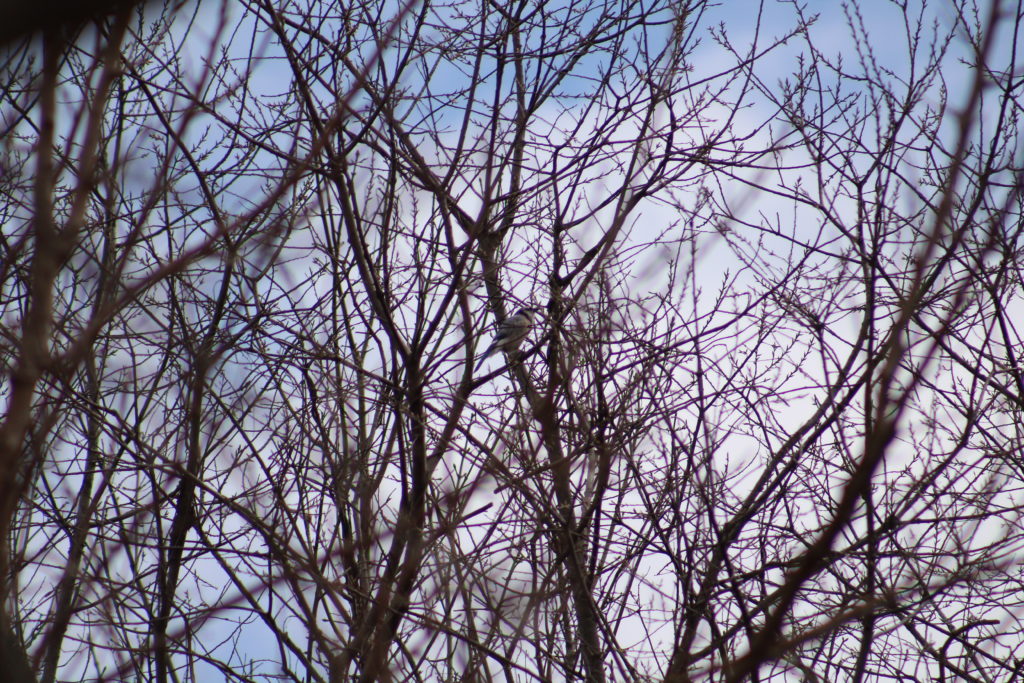 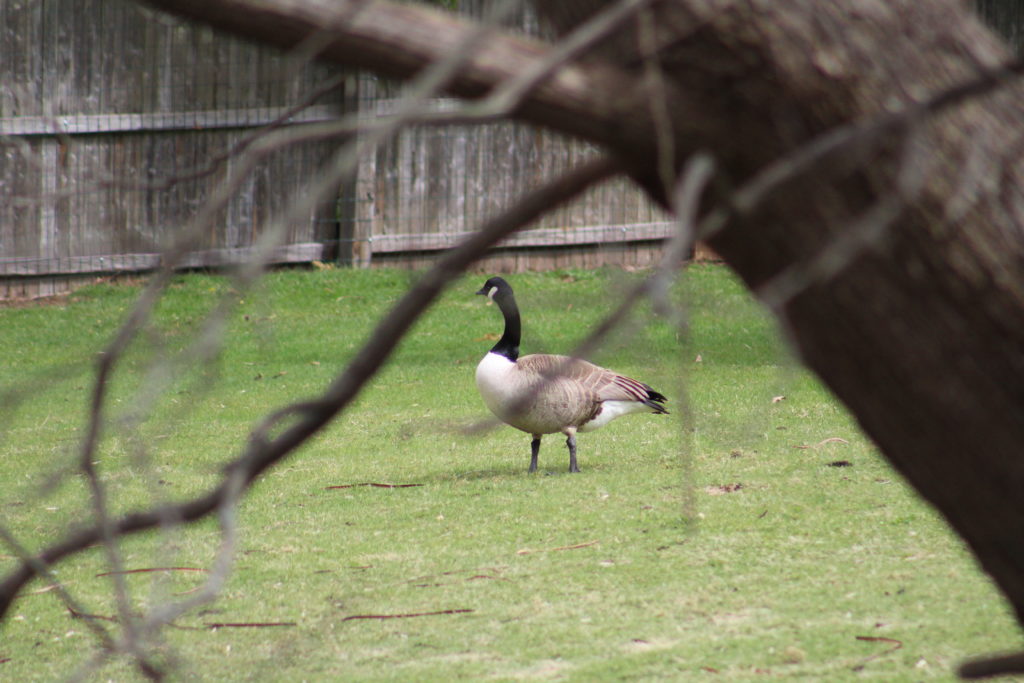 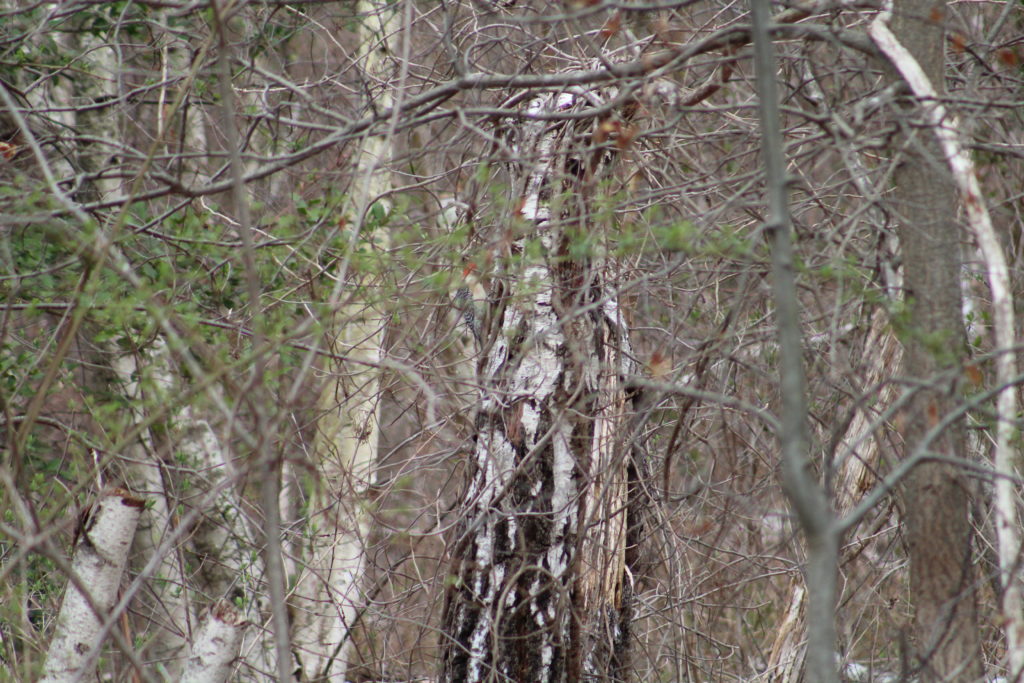 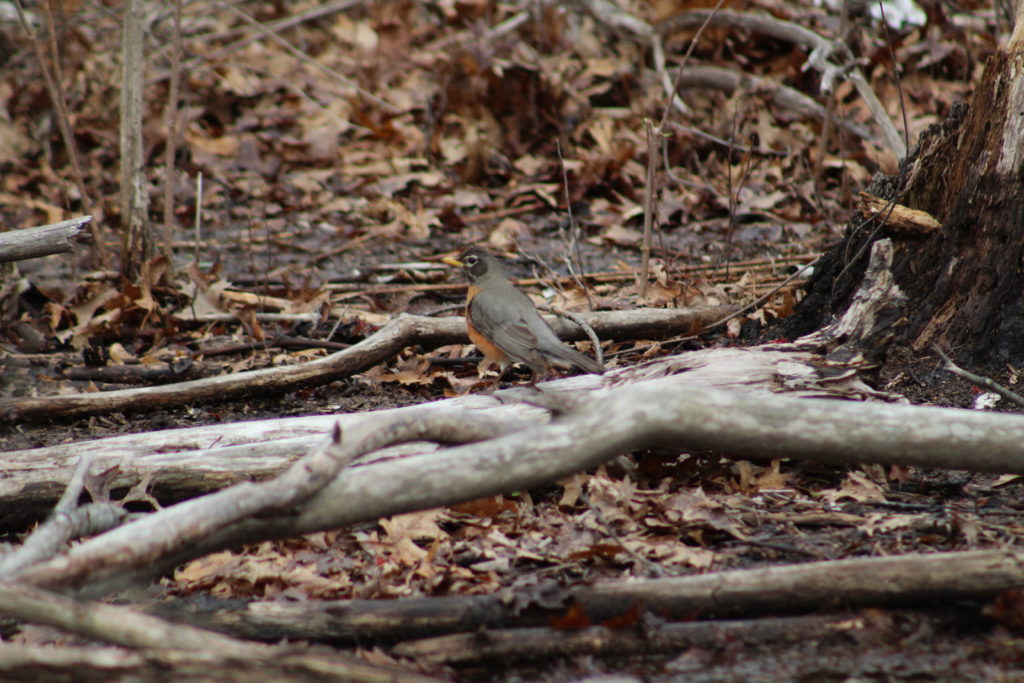 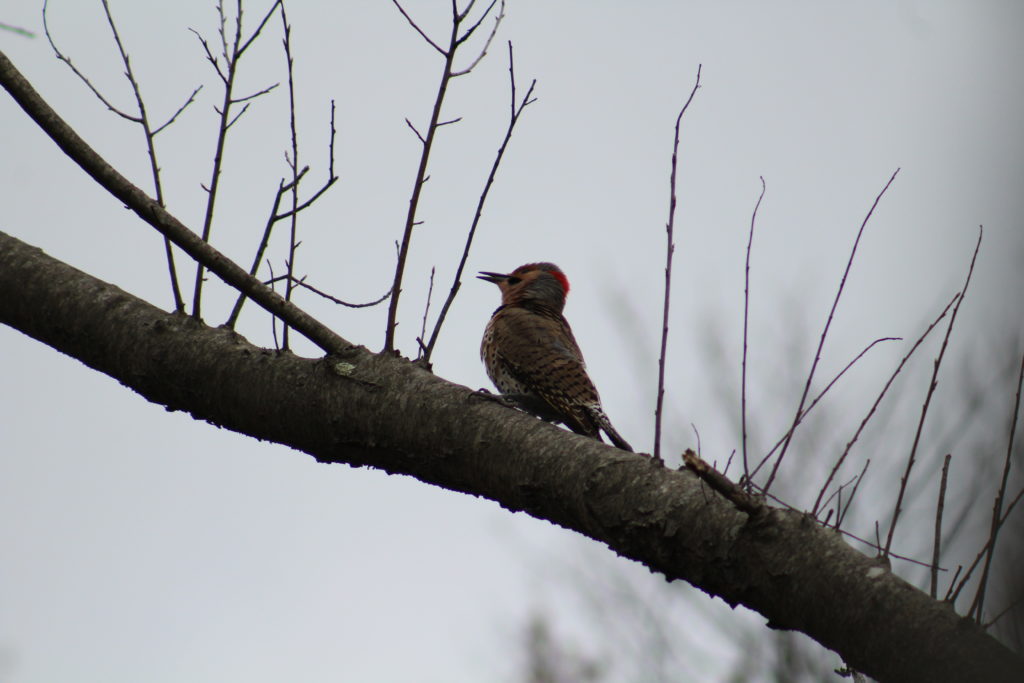 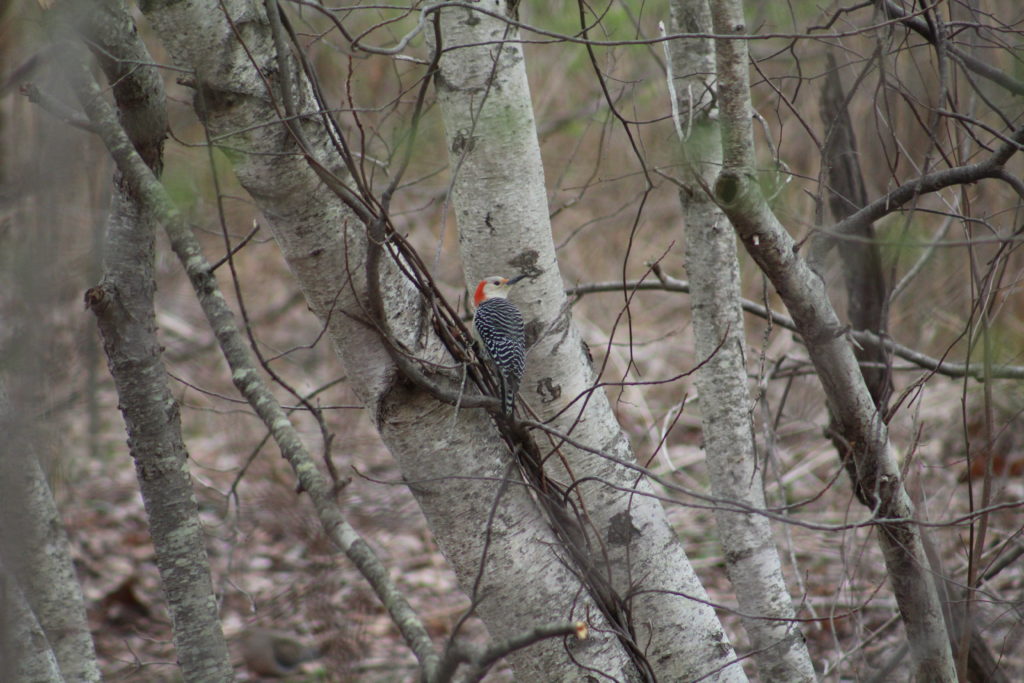 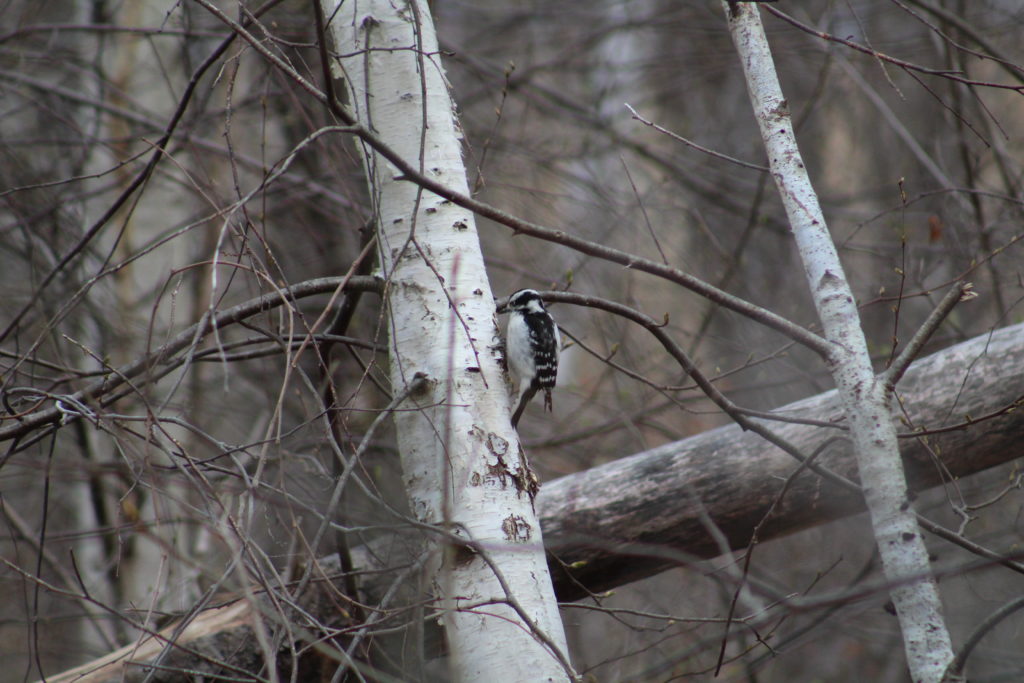 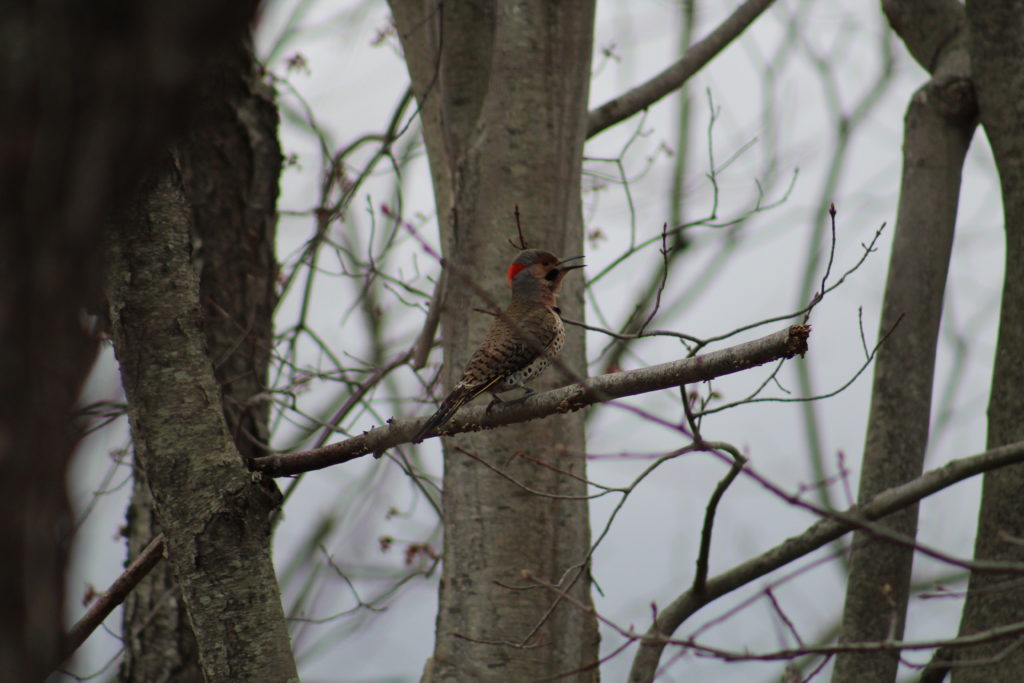 Soon the trees began to clear, the blue of the harbor shown through, and the path led us out to the breathtaking view and salty air. Immediately we were greeted by a large Osprey circling overhead and a Great Egret strolling along the shoreline. Two mallard ducks dabbled about the grasses at the edge of the water and the coos of Mourning Doves called from the trees at our backs. Gazing out over the glittering waters of the harbor, large families of Buffleheads swam past and a lone Double-Crested Cormorant dried himself on a faraway dock. A Mute swan drifted along quietly amongst the bufflehead and an unexpected Snowy Egret sprang from the brush, taking elegantly to the sky. 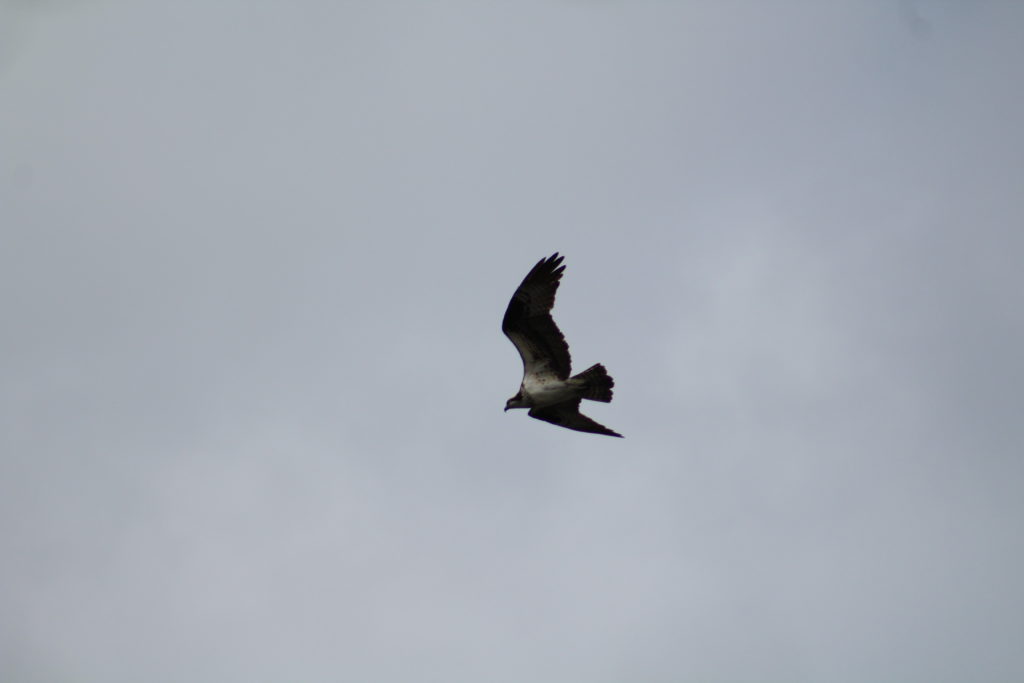 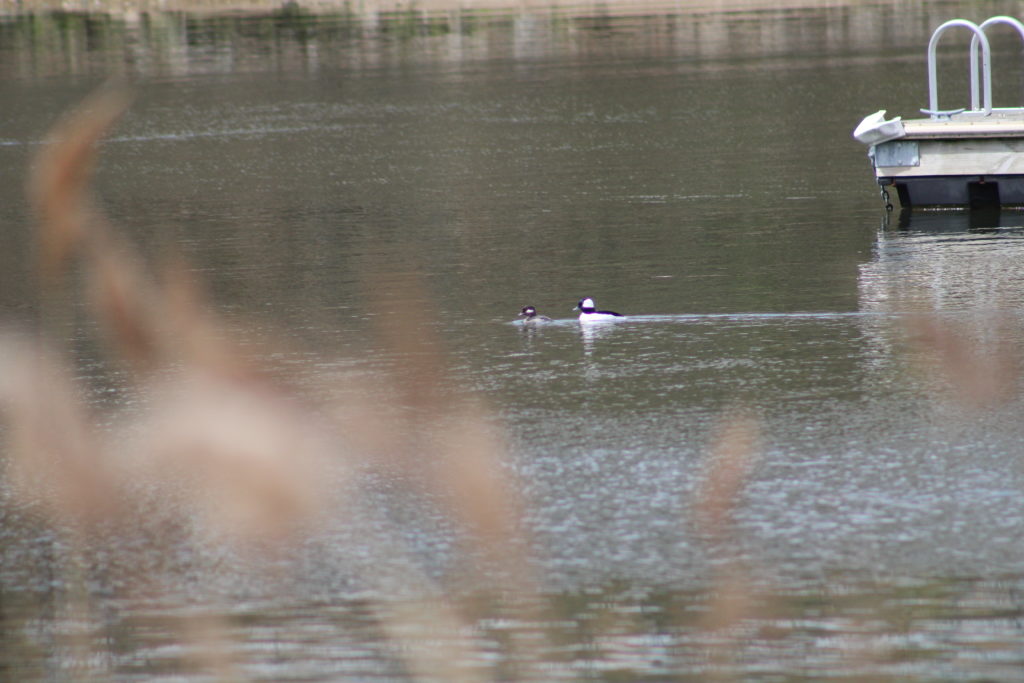 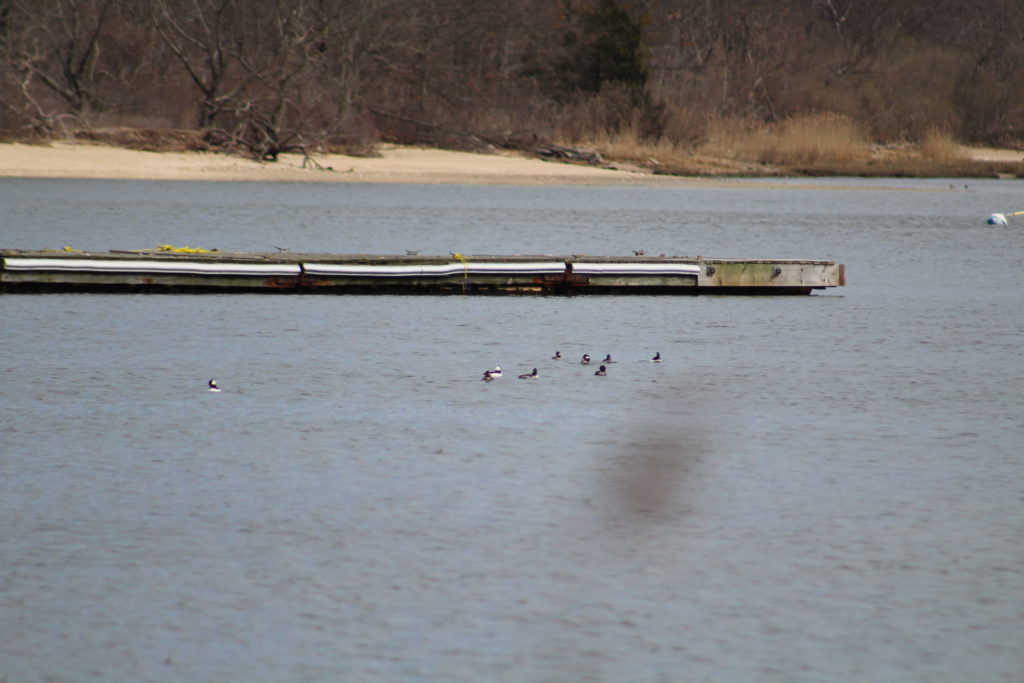 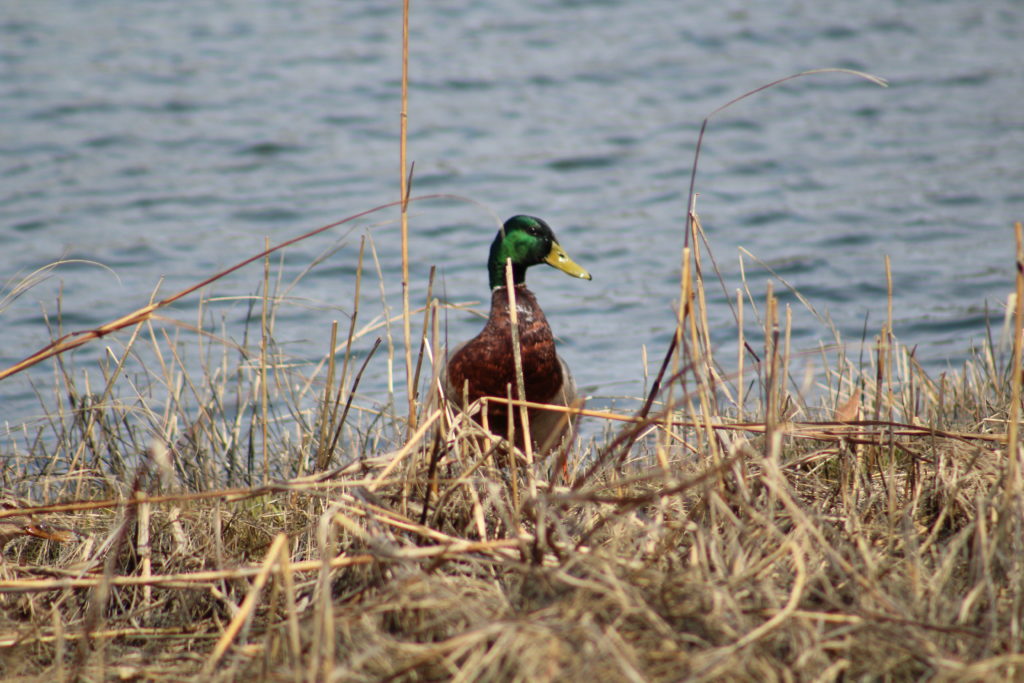 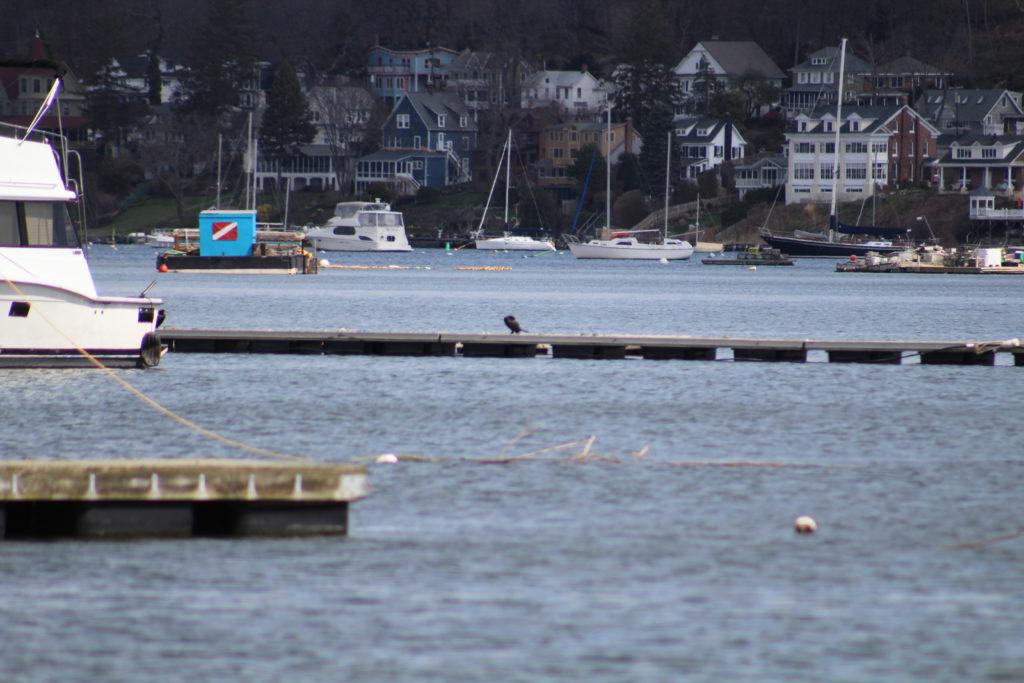 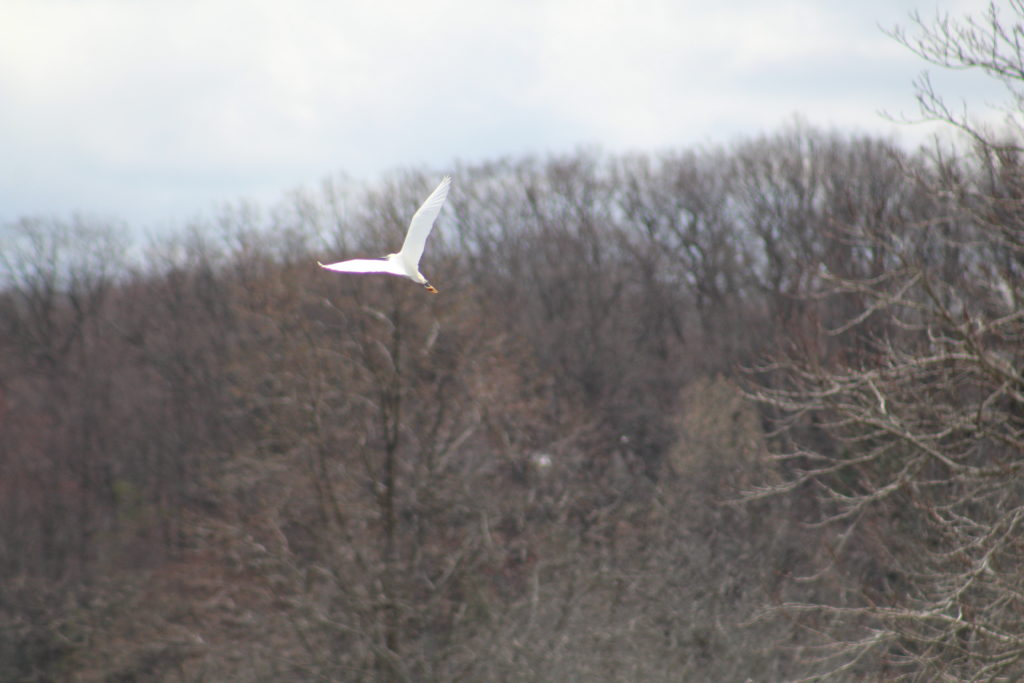 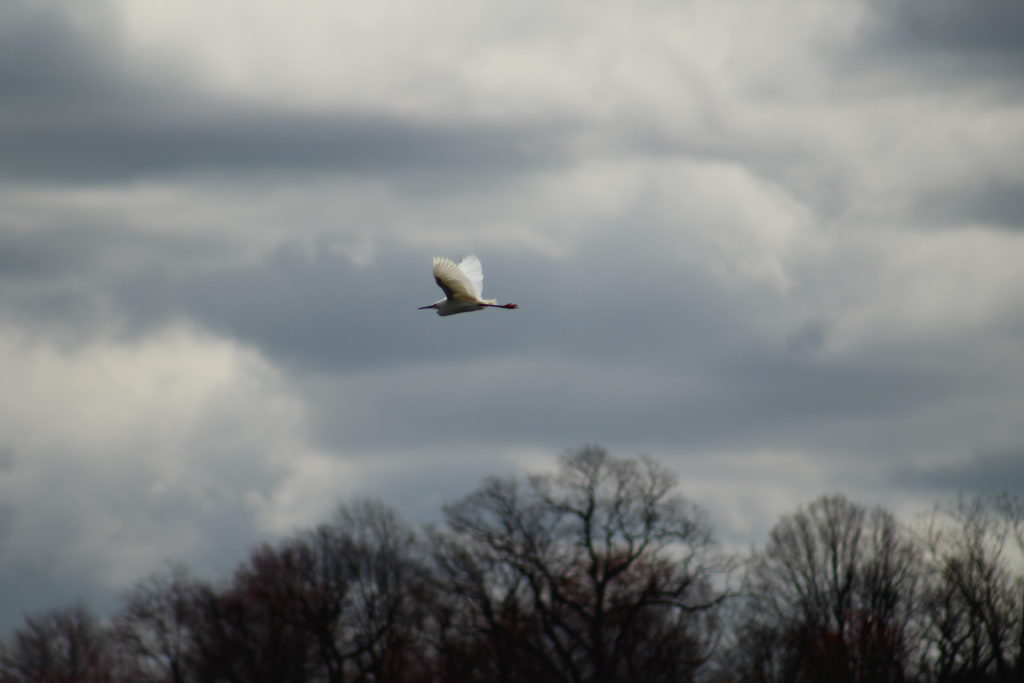 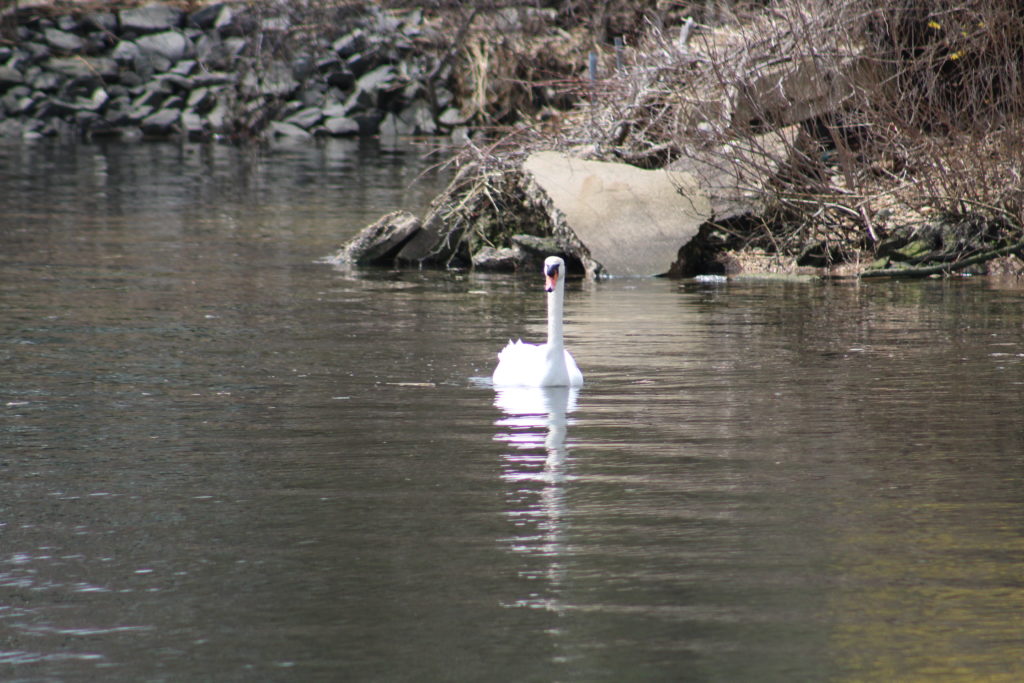 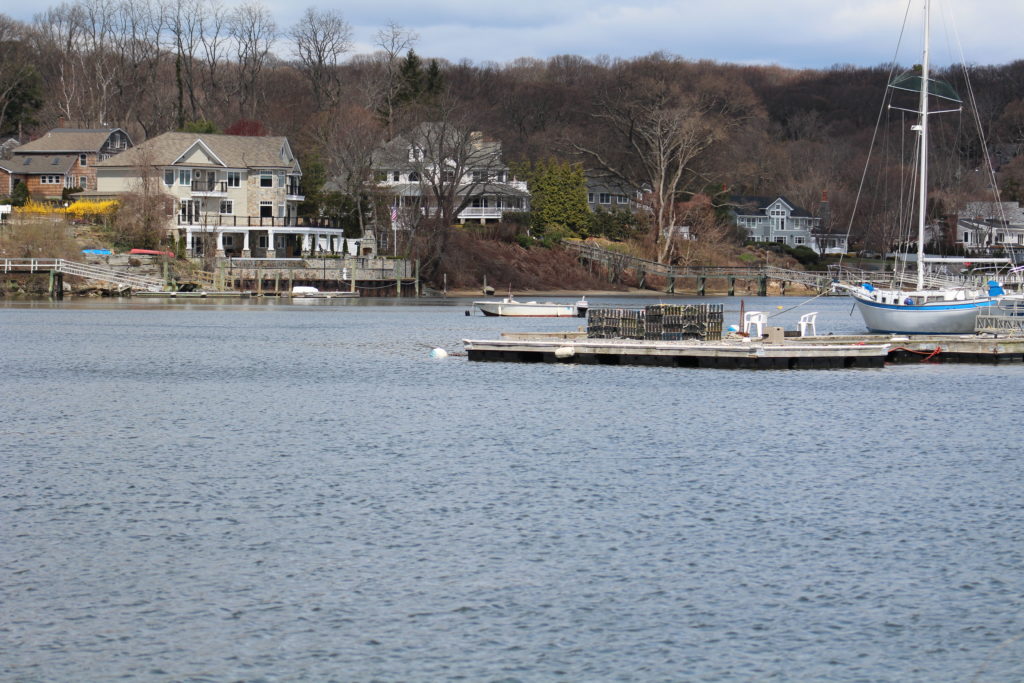 After spending a good while enjoying the beauty of the harbor we set out to continue along the path back to the parking lot. Primarily alone on the trip up until now, the trail back was scattered with joggers and people walking their dogs. We spotted more of the same sights as we hiked; Red-Winged blackbirds, Common Grackles, Blue Jays as well as a beautiful Northern Cardinal.

view from the path back 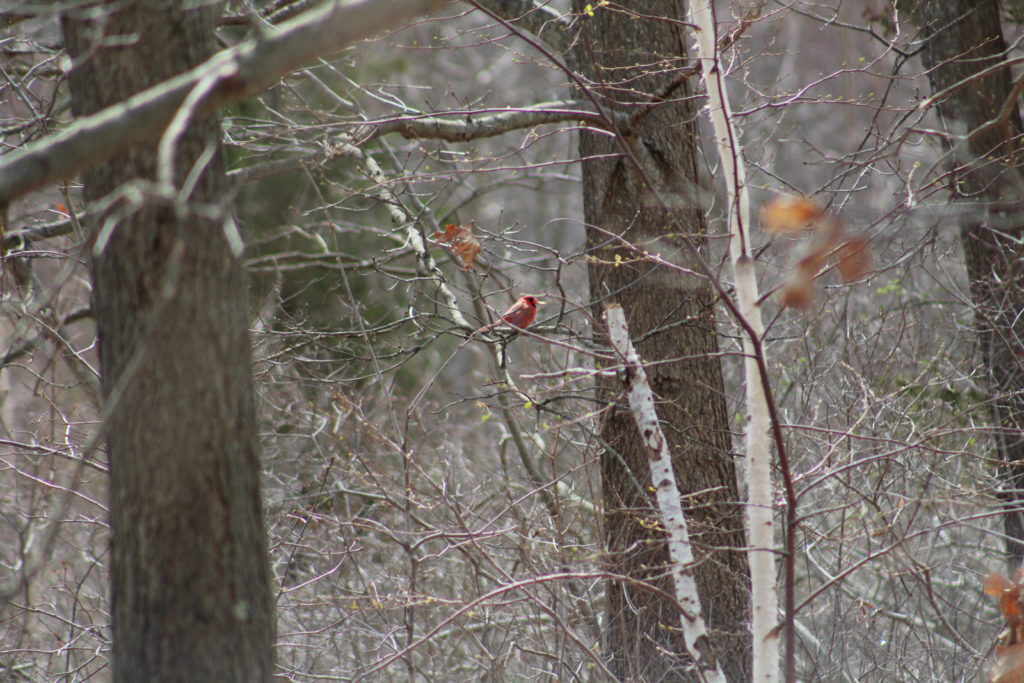 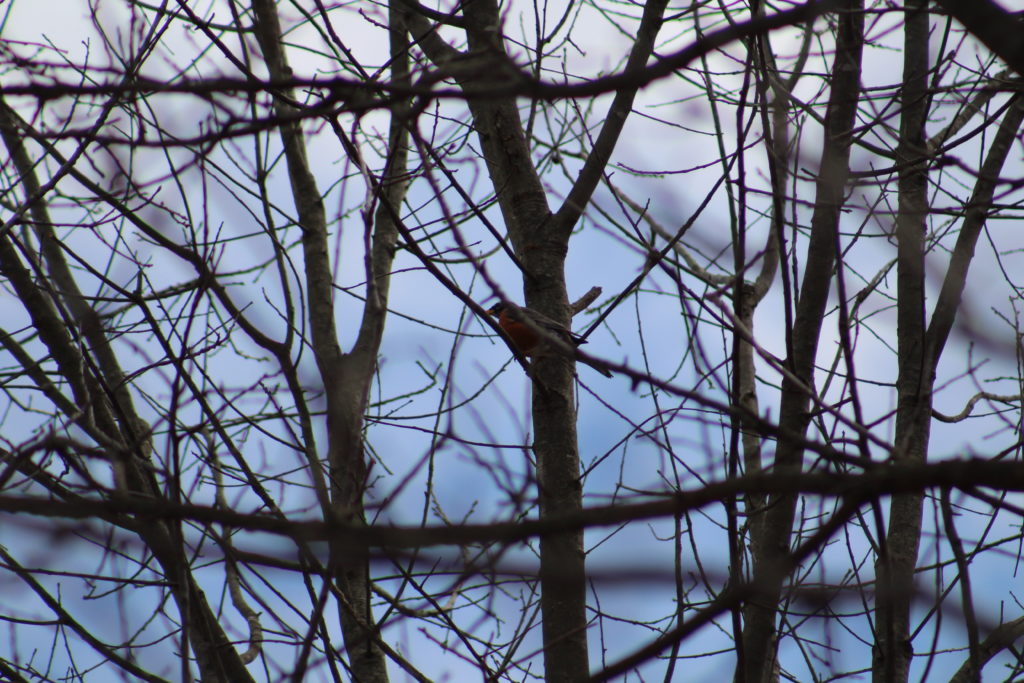 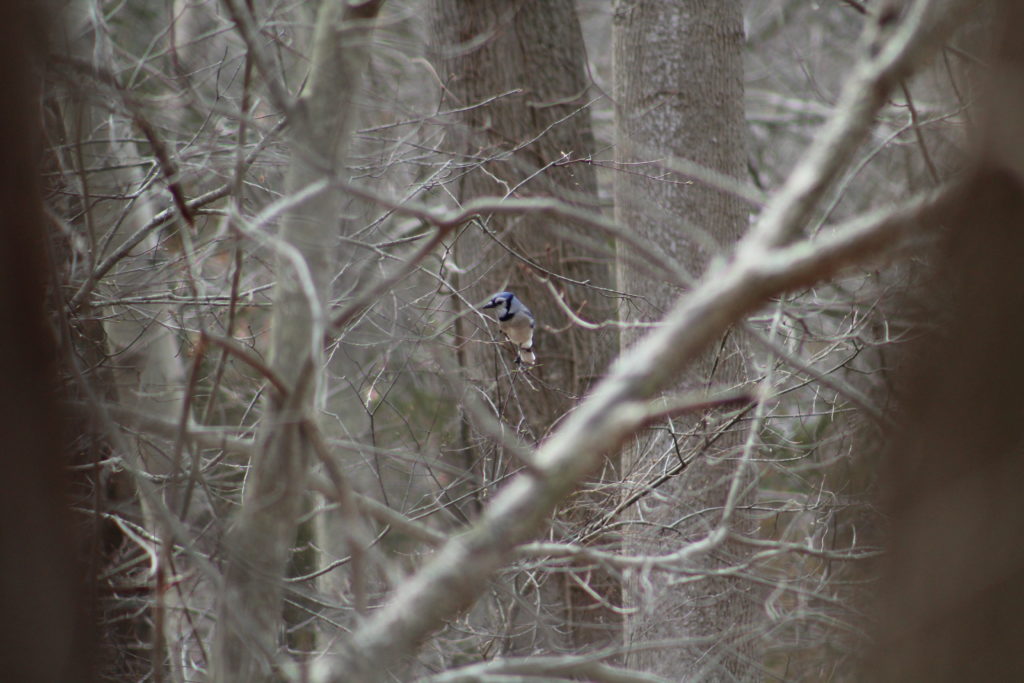 I truly enjoyed this park, it was secluded and felt much bigger then it seemed when we first pulled up. The town itself was quite breathtaking as well, every turn revealing one view more beautiful than the last. I absolutely recommend seeing this park for yourself, and allow yourself extra time to explore a little while you are out there. The area offers many waterways and excellent viewing areas. I very much look forward to returning soon! Until next time everyone, Happy Birding!!